On Monday 25th November I attended the second event of this semester’s poetry series; a reading and Q&A with poet Will Harris.

Will Harris is a writer of mixed Anglo-Indonesian heritage, born and based in London. He has worked in schools, led workshops at the Southbank Centre and teaches for The Poetry School. Harris kicked off the evening with a few readings before partaking in a Q&A with Caleb Klaces.

Prior to that evening I hadn’t read any of his poetry, however hearing him read aloud definitely made me want to buy a copy of his book. My favourite was a poem set in Wetherspoons, which Harris claimed he didn’t read out that often, as it required a lot of energy. And it was definitely energetic! It was really interesting as a Creative Writing student to hear a poem like that, it seemed more like a piece of theatre than a poem; it definitely gave me a lot of inspiration in terms of my own poetry. His poem ‘Another Life’ was also really interesting and sparked a lot of questions in the Q&A that followed. Harris wrote the poem after being shortlisted for a poetry prize against another poet, whose politics he did not agree with, and then subsequently lost out to that poet. It raised a lot of questions about prize culture and, as poets, who we write for. There was an interesting discussion about whether we ever write anything just for ourselves, or do we always write with the knowledge and intention of it being read by other people?

Overall, it was a fantastic evening. Will Harris is an excellent poet, his first full poetry collection ‘RENDANG’ is forthcoming in 2020, I would definitely recommend keeping an eye out for it.

There are also more events coming up in the poetry series next semester to coincide with the York Literature Festival with some fantastic poets, including Fran Lock and Mary-Jean Chan, already confirmed.

Find Will Harris on twitter or on his website for more information about his upcoming release and more of his exciting poetry!

The Minster Gate Bookshop is the perfect bookshop for everybody! Interested in folklore? Wander up to the first floor! Need a new book for the kids? Have a browse through the children’s section downstairs! Lover of Shakespeare? All on the second floor! Gardening? Philosophy? Psychology? Ancient History? You can find anything and everything in The Minster Gate Bookshop!

The Minster Gate Bookshop is one of the must see bookshops in York, possibly Yorkshire. Possibly England. It is a fantastic, and beautiful bookshop, with seemingly endless nooks and crannies packed full of books of all shapes and sizes and interests. Despite specialising in Children’s literature, folklore, and Arthurian literature, there are certainly no limitations to this fantastic bookshop! (I’m trying to be unbiased I promise, it’s just so difficult!)

This treasure of York is definitely worth a visit! Any book lover needs a chance to go there and clear out the bank account! (What else if money for if not books?) 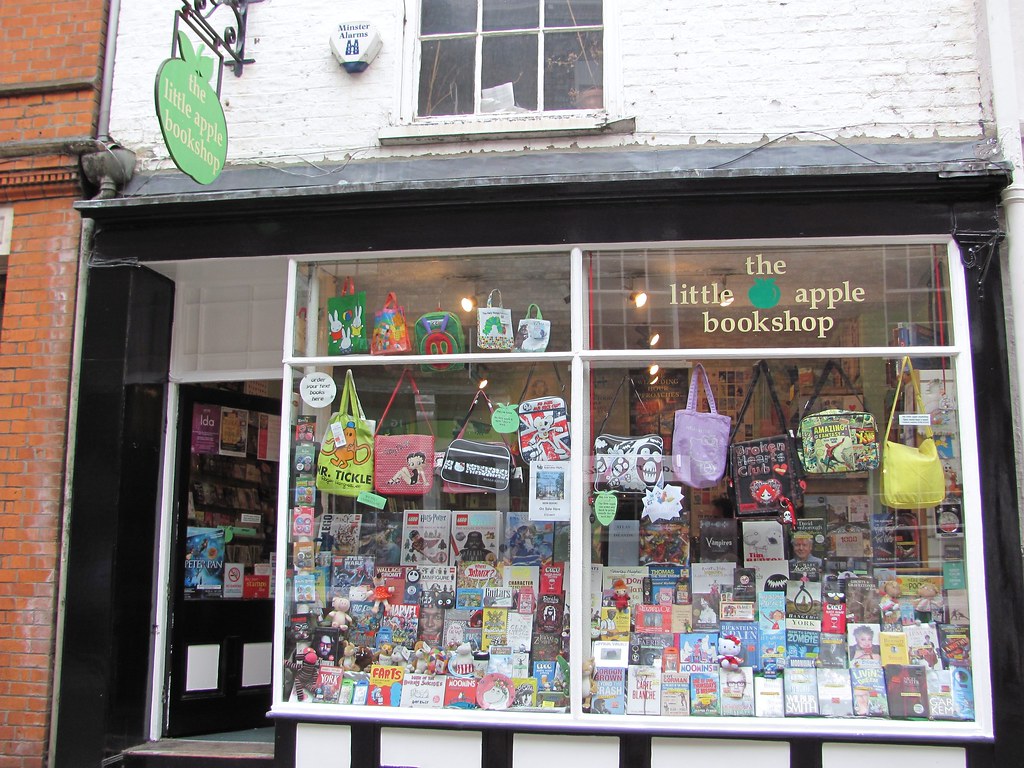 The Little Apple Bookshop is a cosy little place, full of everything you could ever want, especially if you’re a YSJ student! If you are a literature or creative writing student you’ll already know about the Little Apple, as it generally stocks the reading list for first years, just to make things a little easier!

But book buying tips aside The Little Apple Bookshop is wonderful! Not only does it house fiction, humour, poetry, science fiction, signed books, and an extensive children’s section, it has plenty of fun book themed gifts, toys and trinkets. From novelty bookmarks to Shakespeare plush toys to literary tote bags, there’s no better way to let the world know you love books (quite possibly) more than people! 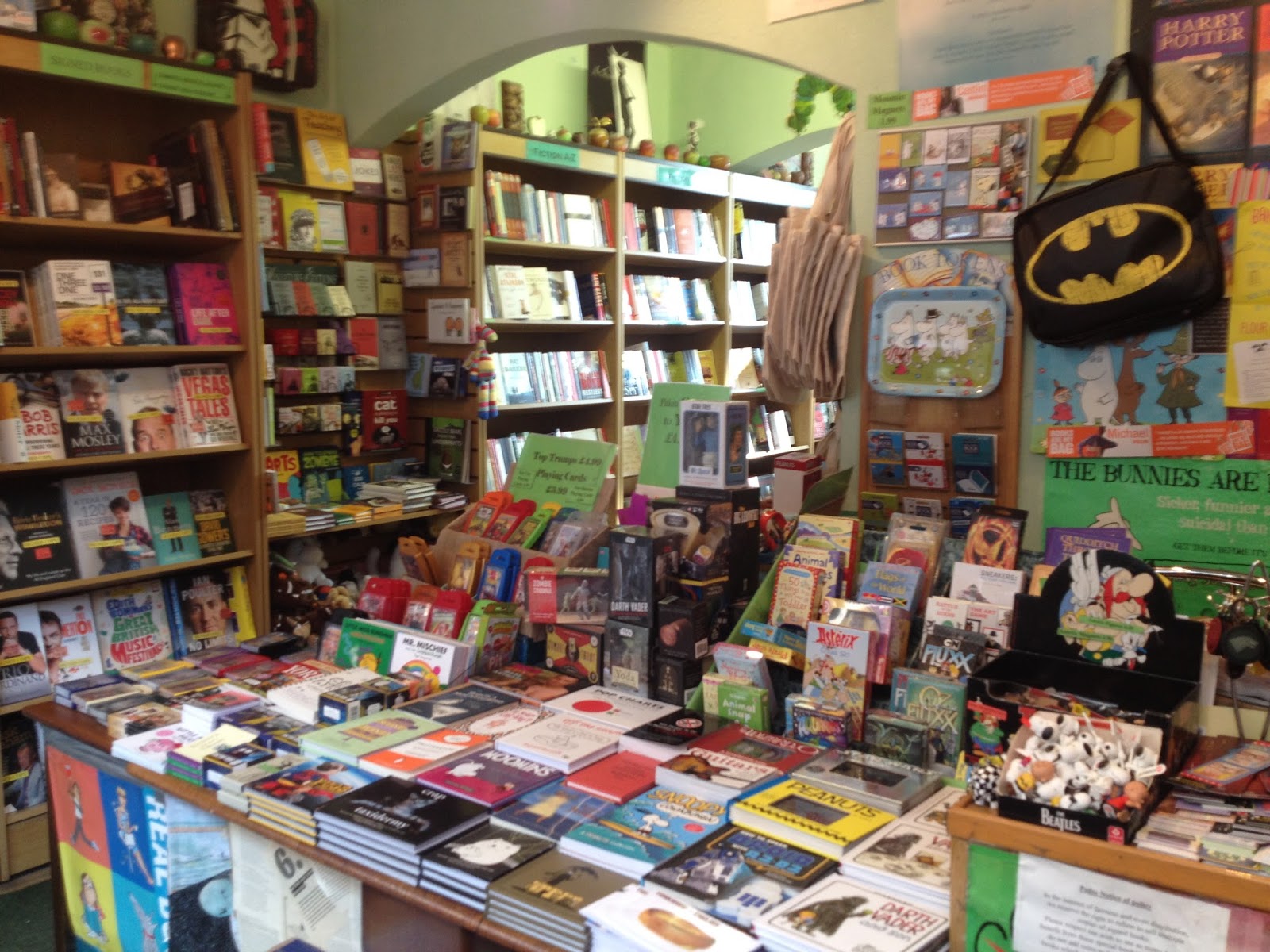 New York may be the Big Apple but Old York has the Little Apple! You should definitely have a taste!! (And pick up a tote bag!)

We may as well start with the big leagues! The York Waterstones can be found on Coney Street and is definitely worth a visit, student or not. There is a wide selection of books and (as you probably know) more can always be ordered in. Our Waterstones is smaller than most in the big cities but certainly fun! The staff are friendly, there’s always tonnes going on – most recently a Harry Potter night that sold out almost right away – and there’s a lovely café on the first floor to have a sip of tea and read your new bookish purchases.

This Waterstones in particular is extremely child friendly, for children of any age. With the children’s section taking up almost a quarter of the ground floor, complete with a play area and small seats, it’s the perfect place to encourage kids to get reading.

The one small issue at Waterstones is that recently the horror section has been integrated into fiction making it harder for novice horror fans (like myself!) to browse the genre as a whole. But on the upside it’s made the Science Fiction section much bigger!

Though it may be small, York’s Waterstones is a lovely place, but we’ll see how it measures up to the rest of York’s wonderful independent and charity bookshops in the coming weeks!

This iconic classic has been on my must read list for a while now. When I finally got around to it I inwardly slapped myself for not picking it up earlier. With the unique two-sided expression of Scout, who is now an adult recalling her childhood Harper Lee manages to explore the discrimination against African Americans in the Deep South in the 1930s through the innocent eyes of a child.

I was quite surprised to notice the infamous court scene and disruption is only a minor event whereas Scout’s childhood adventures and crises become the forefront of the narrative. Harper Lee manages to achieve a narrative that does not drag whilst delaying its major event of the accused rape against Tom Robinson to beyond half way through the novel. However, this captured my attention much more as I became fully absorbed in the daily lives of these people and in turn, understood the subtle ways black people were discriminated against in this period. I also found the structure and pace easy to follow; the disruption of studies forced me to stop half way through but I returned to it with no confusion about where I had left off. Saving me from the torturous flipping back through pages to remember who was who.

The characters all have a unique, memorable voice that adds life to the neighbourhood and does not leave anyone in the shadows. Each special individual leaves a mark on Scout’s childhood and embeds a moral learning curve into the narrative. The family disputes and coming of age events add a realistic edge to the novel that can leave the reader with a more emotional and questioning response when finishing it. I can assure people that this is a ‘read before you die’ novel.

Printed in the anthology of ‘Best British Short Stories’, Ellis Sharp’s story ‘The Writer’ had a lot to prove from the outset. It does not disappoint. Sharp manipulates the reader, scattering description and metaphor in a surreal context, introducing giant slugs, ravens that appear to have a sense of staging and a massive eight-legged creature. The story behaves as if it is a journey through a strange Picasso painting, wandering through strange images that are frequently symbolic or carry contextual baggage.

However, Ellis then rewrites his entire narrative, shattering everything that he has created through his direct address of the reader. The end result is a self-reflective story that question’s its own fantastical narrative as Sharp admits that the story is only remotely based on something real. The reader’s suspension of disbelief is torn down to recognise the story as just that, a story. Sharp demonstrates the power that the writer has over the everyday, to twist it into behaving however they like and the reader’s wish to believe whatever is written, no matter how unbelievable.

The question that the short story asks the reader is: ‘how much reality and how much fantasy do you expect a story to contain?’

Valente based Deathless (2011) on the Russian folktale, The Death of Koschei the Deathless, which can probably be best compared to Bluebeard. Ivan marries the warrior princess, Marya Morevna, who forbids him from entering their cellar. When he inevitably does so, he finds Koschei, a demon, chained up. Cue trials by Baba Yaga, numerous coincidences, a battle, and a happy ending.

In Deathless, Marya is the protagonist, rather than Ivan, which allows Valente to answer the question of why on earth Marya was hiding Koschei down there in the first place (something which Alexander Afanasyev clearly forgot to ask when The Death of Koschei the Deathless was first collected in Narodnye russkie skazki). The imagery and scope of her novel is as rich as one would hope of a fantasy kingdom running parallel to revolutionary Russia.

The novel is only made a tougher read because Valente is preoccupied with the inevitability of the fates of Marya, Koschei and Ivan. She clearly wants us to question the agency of a fairytale heroine, but by having characters that know exactly what will happen, and say as much (frequently) it serves to weaken the tragedy. She doesn’t so much toy with the element of surprise, as beat it into submission, and also tends to be heavy handed with large and anticlimactic time jumps between the sections of the novel.

The structure of the novel is frustrating, but the beauty of Valente’s unambiguous, vivid prose makes Deathless overwhelmingly readable.

In the autumn of 1980, Toni Bentley was a member of New York City Ballet’s corps de ballet, dancing for legendary choreographer George Balanchine. Despite such an achievement, the then twenty-two year old Bentley was disillusioned, and what followed was a journal documenting her experiences during that winter season.

If you think of New York City Ballet and think Black Swan, then think again. Winter Season is an unflinchingly realistic portrayal of ballet: repetitious, disciplined and lonely to the point of religious devotion. And not a single hallucination of graphic lesbian sex in sight. That isn’t to say that Bentley keeps things tutu pink and innocent; in between her accounts of Balanchine’s ballets, she describes her sexual encounters as fairytale.

Bentley muses on youth in a world where careers end at age thirty, artistry is often ignored for showmanship and athleticism, and where the erudite, cultured narrator is misplaced in the shallow world of dance. Winter Season is perhaps what Black Swan ought to have been, but much like contemporary ballet, I suppose showmanship wins out over artistry.

Read an excerpt from Winter Season: A Dancer’s Journal on Bentley’s website, HERE.